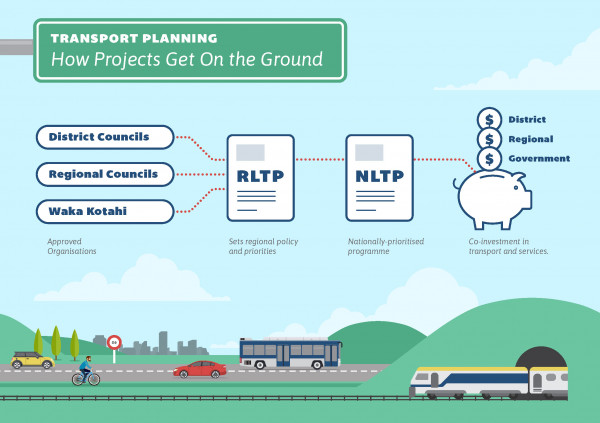 Why is transport planning so important?

Transport is vital to everyday life, from travelling to work and play, to getting access to the goods and services we need, and helping our exports and imports move smoothly to and from ports and airports.

Our regional transport systems shape the places we live and how we live. How we manage our transport networks and the way we use them also has a big impact on our health and safety.

Transport is also one of the biggest contributors to greenhouse gases and climate change. Government and many councils have joined in declaring a climate emergency. With emission-reduction targets now having been set by the Climate Change Commission, addressing these challenges will require strong collaborative relationships, regionally-coordinated and prioritised action in order to achieve the goals set.

This includes the need to rely less on cars and more on public transport, walking and cycling.

Roading links, public transport and the needs of our freight industry must be recognised in regional as well as national transport planning. Transport is one of the largest areas of central and local government investment.

Regional councils, territorial authorities (district and city councils) and unitary councils (councils with both local and regional responsibilities) lead their long-term planning process. This includes things such as how land is zoned, what areas should be protected and how they allocate their funds.

Regional councils play an important role both by providing public transport services, and by convening and supporting Regional Transport Committees (RTCs). RTCs have representatives from at least each territorial authority and Waka Kotahi New Zealand Transport Agency and translate national transport goals into meaningful plans for each region. They coordinate the relationships which take the strategy set out in the Government Policy Statement on Land Transport (GPS) and bring them into being – they are the regions’ voice on transport priorities.

This ensures that transport planning, investment and public transport services are delivered at the grassroots level.

Who makes the decisions on transport planning?

Transport planning starts at the very top, with the Central Government.

The Government works under a law – the Land Transport Management Act 2003 (which aims to achieve a land transport system that is effective, efficient, safe and in the public interest).

In practice, the Government works broadly to a ten-year plan. That’s because spending for transport infrastructure has long lead times, high costs and long-term impacts. Therefore transport planning and spending need to be guided by a long-term strategy, with a clear understanding of the outcomes Government wants to achieve.

Government direction is set out in the Government Policy Statement on Land Transport (GPS). It sets out the priorities for New Zealand’s land transport investment and is reviewed every three years.

The Ministry of Transport helps the Minister to produce the GPS, which puts great value on integrated plans, with land use, transport planning and urban design working together for economic growth and better integration between transport modes (buses, trucks, cars and rail) and which provides an environmentally-sustainable transport network.

Every three years, Government’s policy direction is updated, so it remains current and relevant to today’s needs.

The GPS guides a detailed investment plan which Waka Kotahi gives effect to through the National Land Transport Programme (NLTP). This programme must be consistent with the GPS.

While the NLTP is prepared by Waka Kotahi (which invests national funding and promotes national priorities), a key building block is Regional Land Transport Plans (RLTPs) which promote local and regional transport priorities).

As a result of this vital regional input, the NLTP ends up detailing all the land transport initiatives and activities – both regional and national –  that Waka Kotahi anticipates funding during the next three years.

It is how regional councils help “plans” become real “on-the-ground” improvements in transport which give people a better lifestyle and help companies and the economy to grow.

Regional and unitary councils  also plan, co-fund and deliver public transport in their regions. In doing that, they work with Waka Kotahi, local city and district  councils and KiwiRail (in regions with passenger rail services).

Other important partners are public transport operators, who run the actual bus services (and in some regions passenger trains and ferries). For people who have difficultly using regular public transport services, regional and unitary councils subsidise taxi services through the Total Mobility Scheme.

Public transport is funded through the fares paid by users, regional council rates and investment from Waka Kotahi.

High-quality public transport plays an important role in achieving Central Government’s and regions’ objectives in areas like mode shift, accessibility for all users and environmental objectives (like emissions reduction).

AT was established in 2010 to take up the transport functions of the seven city and district councils and Auckland Regional Council that were combined into Auckland Council.

AT is a Council-Controlled Organisation of Auckland Council and is responsible for all the Auckland region's transport services, from roads and footpaths, to cycling, parking and public transport.

Where does the money come from?

The money for the NLTP investment comes from the National Land Transport Fund (NLTF), council rates and other Crown funding such as the New Zealand Upgrade Programme. The NLTF is a dedicated fund for maintaining and developing local and national transport services.

The Government provides most of the money to the NLTF from fuel excise duties (petrol taxes), road user charges, motor vehicle registrations and licensing fees. It can also decide to provide additional Crown funding outside the NLTF to progress specific transport activities or projects.

However the rest of the money – a sizeable proportion – is provided by regional councils, territorial and unitary authorities.

Councils nationally spend about 25 percent of their annual budgets on transport. For regional councils, this percentage can be much higher or lower, depending on the council, and how much public transport is provided. In 2018 New Zealand’s 11 regional councils (not including Unitary Authorities or Auckland Council) invested a total of almost $330 million on transport.

How do regional transport plans fit in?

They are developed by Regional Transport Committees (see below for more information). They set out the objectives, policies and priorities for transport networks and services in New Zealand’s regions.

The RLTPs are the regions’ views of where to invest for the best outcomes in their areas and which significant (i.e. big) activities are prioritised. They are an important step in building strong, evidence-based projects and programmes for investment locally and regionally.

Then they are prioritised nationally by Waka Kotahi into the National Land Transport Programme (NLTP).

Regional Transport Committees (RTCs) are the voice of the regions.

They are statutory committees (meaning they have to be set up by law) and are formed under the Land Transport Management Act (LTMA) 2003.

Although the RTC is a committee of the regional council, it is a collective and collaborative committee of all councils in the region with each having a voting member. Waka Kotahi is also a statutory member of the RTC. Some regions have other, non-voting members or advisors including KiwiRail in Auckland and Wellington.

With each member bringing the views of their organisation to the committee, it is the job of the RTC to bring this together and form a shared view of the region’s transport priorities. The collective view of the RTC forms the basis of the RLTP.

That becomes the regional layer in our land transport planning and funding system.

Who gets to have a say?

Groups representing land transport users and providers are consulted when the Government prepares the GPS, this includes regional and district councils.

Councils also encourage community participation in their own decision-making. This includes engaging with Tangata Whenua to make sure their plans take into account and reflect Māori aspirations and relationships under the Spirit of the Treaty of Waitangi.

People also have an opportunity to provide input to Regional Land Transport Plans when they are consulted on during their development.