High-density or multi-unit homes include apartments, townhouses, flats and units, and retirement village units. Growth of these outpaced that of stand-alone houses, which grew 6.1 percent between the last two September years.

The population of New Zealand in the mid-1970s was around 3 million, compared with about 4.9 million today.

“The rise in consents for multi-unit homes continues to be driven by more activity in Auckland, with over 1,000 more multi-unit homes consented there in the past 12 months than in the previous year,” construction statistics manager Melissa McKenzie said.

“More multi-unit homes have been consented in other regions too and are becoming more common in many parts of New Zealand.” 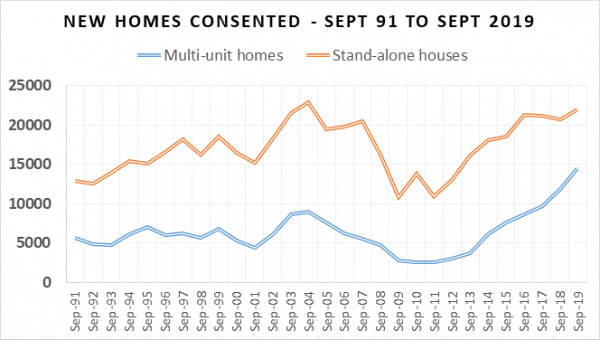 In seasonally adjusted terms, the number of new homes consented rose 7.2 percent in September 2019, following a 0.9 percent rise in August 2019.

The number of new homes consented each month can vary significantly due to timing of large multi-unit dwelling projects, such as townhouses and apartment buildings.